General Commercial 19 Jan 2021
Print production workflow | Optimizing operational productivity and results
This research study explores printers’ perceptions of workflow automation and examines the ways in which workflow automation offers printer providers many benefits to improve and grow operations. This whitepaper is based on an in-depth survey of the readers of Printing Impressions.
Go back 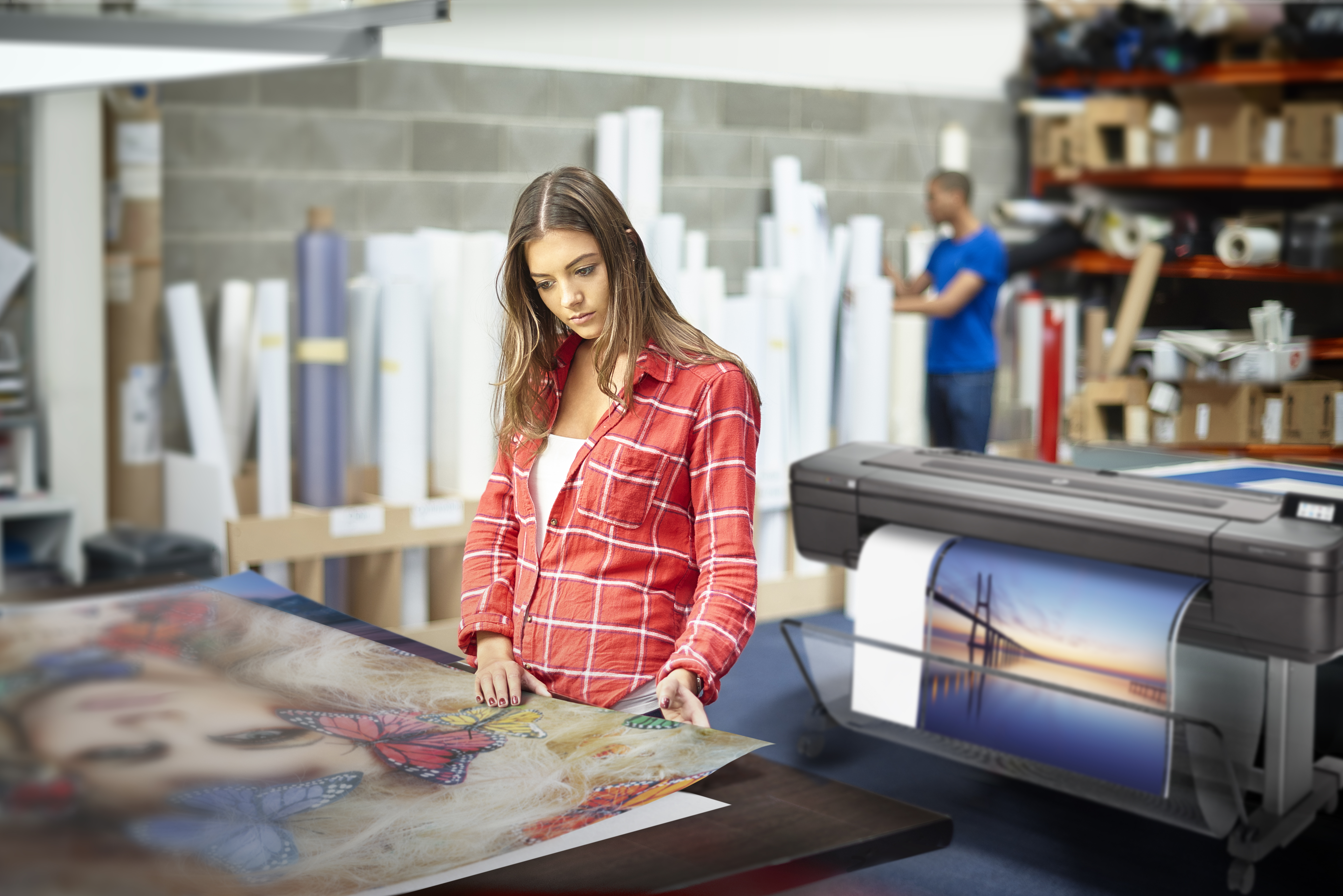 Welcome to this HP Site Flow whitepaper on automated print production workflow. This is part of a series of whitepapers commissioned by HP in 2020 and provide a thorough independent analysis of current workflow trends and the benefits that it can bring across verticals. From capturing digital labels and packaging through short-runs and mass customisation to scaling to thousands of orders without falling apart, this series is designed to help any print service provider get the full picture. The whitepapers can be read in full on this site or downloaded instantly as a PDF with no pesky forms to fill out. From all of us in the HP Site Flow team, we hope you find the series useful.

The Industrial Revolution is said to have progressed through four stages: mechanization; mass production; computerized automation; and autonomous, “smart” manufacturing. The printing industry, mechanized since the middle of the 19th century, is still substantially oriented toward mass production, but its “smart” future is now coming into view. The bridge to that future is automation – specifically, the digital optimization of production and business management tasks collectively known as print workflow.

Workflow automation is based on the idea that every step in printing a job can be digitally linked to other steps, creating a chain of programmed events that keep the job moving continuously ahead toward completion. Ideally, this chain of events extends all the way from order intake to delivery of the finished product, generating streams of data that track the job, monitor its costs, and yield insights into making the production of subsequent jobs even more efficient. More advanced automation uses business rules, predictive algorithms, and software to automate tasks and decisions, helping to minimize human intervention and cut implementation time.

This kind of end-to-end, fully automated print workflow is more than just theoretically possible. A few printers have achieved it. Most printers, however, are either at early to intermediate stages of workflow implementation. While some are still just starting to consider their options for making it happen, having an automated workflow is widely acknowledged in the industry as essential to competitiveness and to future-proofing one’s business.

This research report, the first of two on the subject of future-proofing operations with workflow automation, looks at the operational and business benefits automation is delivering to print providers. The next report will cover how printers are using workflow automation to integrate and optimize their processes, including breaking the bottlenecks that hamper production.

Although most respondents report some level of automation across the various stages of production, relatively few said they had achieved full automation from end to end. The responses also indicate that significant amounts of work are still being done either mostly manually or entirely manually at all stages. This suggests opportunity to extract greater benefits from automation by investing more in automation.

Based on their ranking for each job stage, all 254 respondents were scored and classified in one of three categories: high automation, medium automation, and low automation. Each job stage was weighted equally in scoring automation levels.

These respondent segments are the foundation for evaluating the benefits and advantages printing operations are experiencing through workflow automation.

Segmenting types of printing providers by level of automation offers insights into which types of providers have embraced workflow improvements, and which providers can still harness opportunity from it.

Looking at the size of respondents’ organizations by level of automation shows that larger respondents typically are more automated than smaller firms. Likely reasons are that they have more money to invest, and have much to gain from automation in the form of enhanced efficiency, productivity, and profitability.

Respondents were given a number of options for reporting the analog versus digital composition of their printing equipment and were asked to select the choice that best described their operation. Figure 6 shows that 50% of respondents report having an entirely or mostly digital operation, while 21% are mostly or entirely analog and 29% do not have a dominating process.

An interesting survey finding of respondents that operate only digital presses is that they required fewer people to onboard jobs and that in many cases, onboarding is totally automated (Figure 7). While respondents with high levels of automation reported higher levels of completely automated job onboarding than those with less automation, printing only on digital presses was more strongly correlated with automating this task and reducing the number of people needed to perform it. 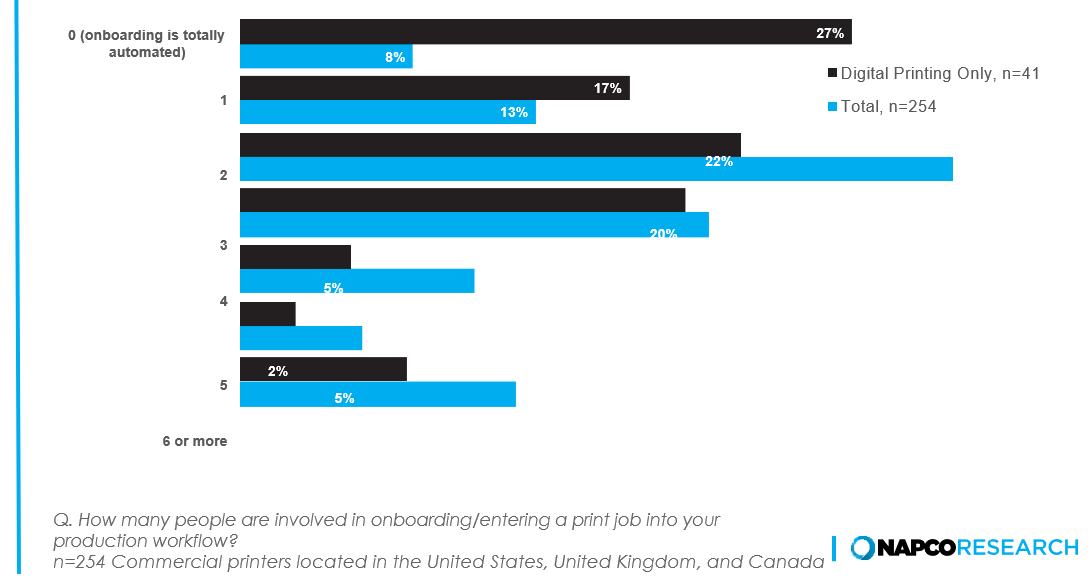 A closer look at the benefits survey respondents are gaining from automation reveals the following significant advantages:

A key reason automation can improve revenue and sales growth is that it enables higher productivity so organizations can produce and sell more print jobs.

The survey defined IT spending as including software, infrastructure, and external/internal ongoing development. Highly automated firms invested 1.7% of revenue in IT spending compared to 1.2% for firms reporting lower automation.

Figure 11: Firms with Higher Automation Invest More in IT 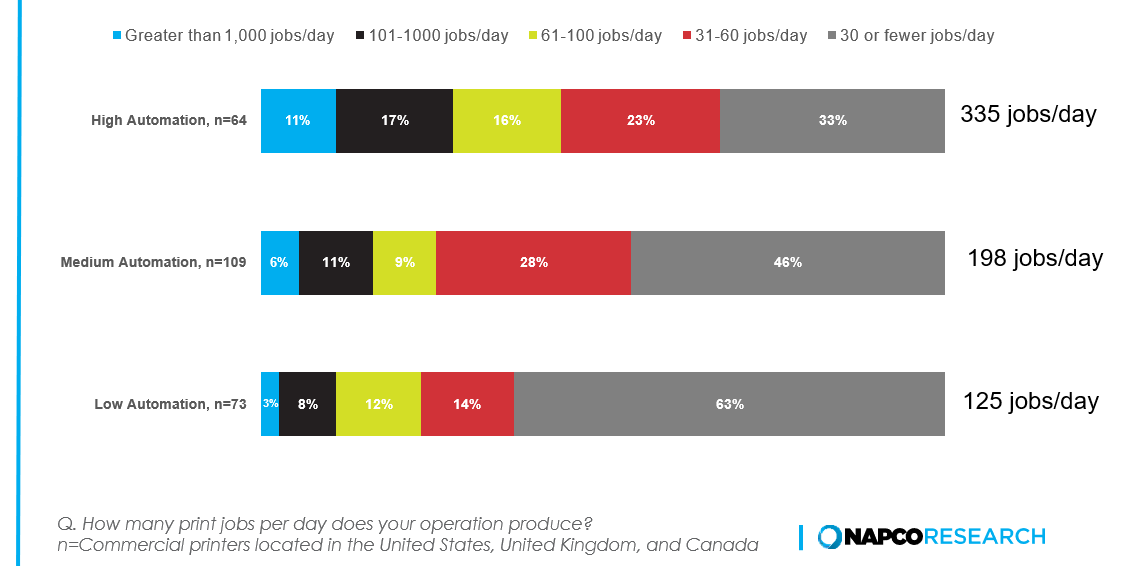 The survey asked respondents what percentage of their finished print work was produced in various turnaround times. Respondents with higher automation tended to produce work in faster timeframes than those with less automation (Figure 13). 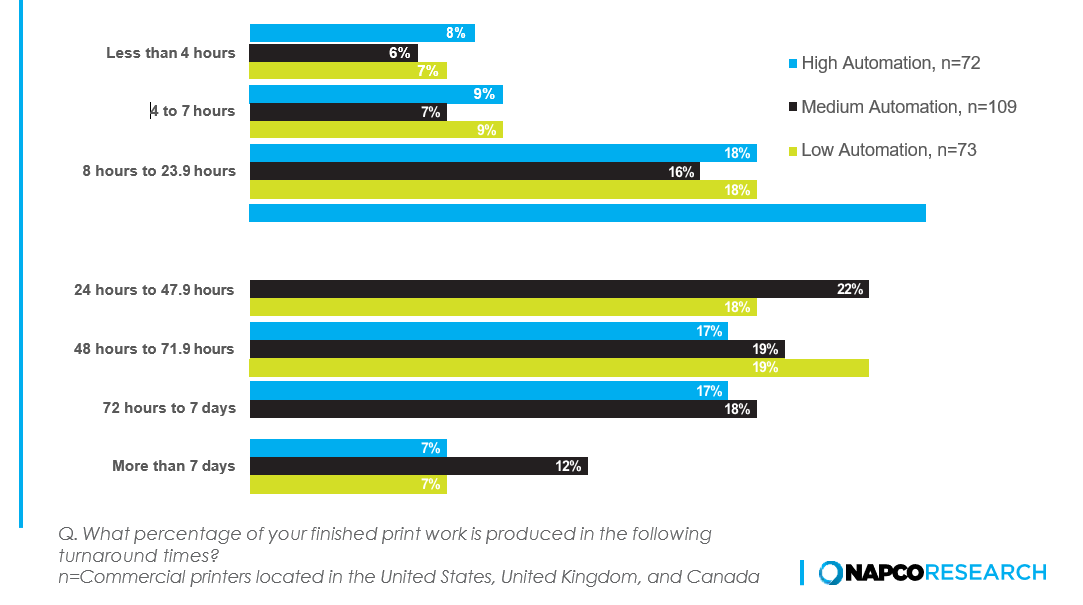 Nearly all respondents (90%) somewhat agreed or strongly agreed that automating production workflow increases profitability per job – the ultimate justification for any investment in technology (Figure 14). Overall, most respondents agree that automation improved profitability per job, but those with more automated workflows had a higher level of agreement. Those firms with higher automation reported producing more jobs, faster, with better press utilization and less waste (Figures 8, 12, and 13).

Survey respondents also report that workflow automation reduces errors and reruns because it reduces touchpoints – the stages of production where people interact with jobs in progress. More than eight in 10 of highly automated respondents (88%) and those with a medium level of automation (81%) somewhat agreed or strongly agreed that this is correct (Figure 15). 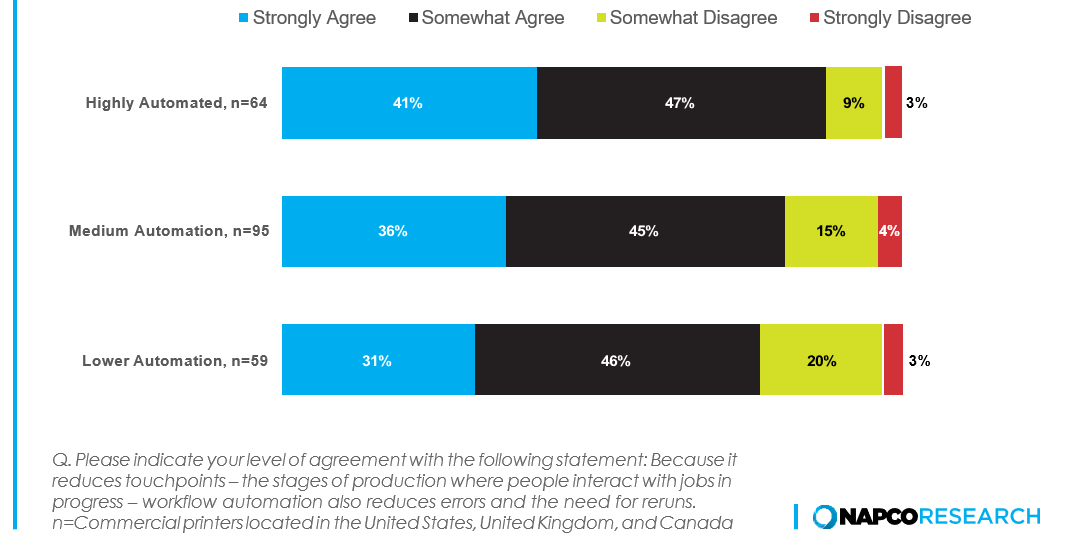 Respondents with high levels of automation also supported the idea that automating production workflows will enable their companies to break into new markets faster and better manage the diversification of their businesses. 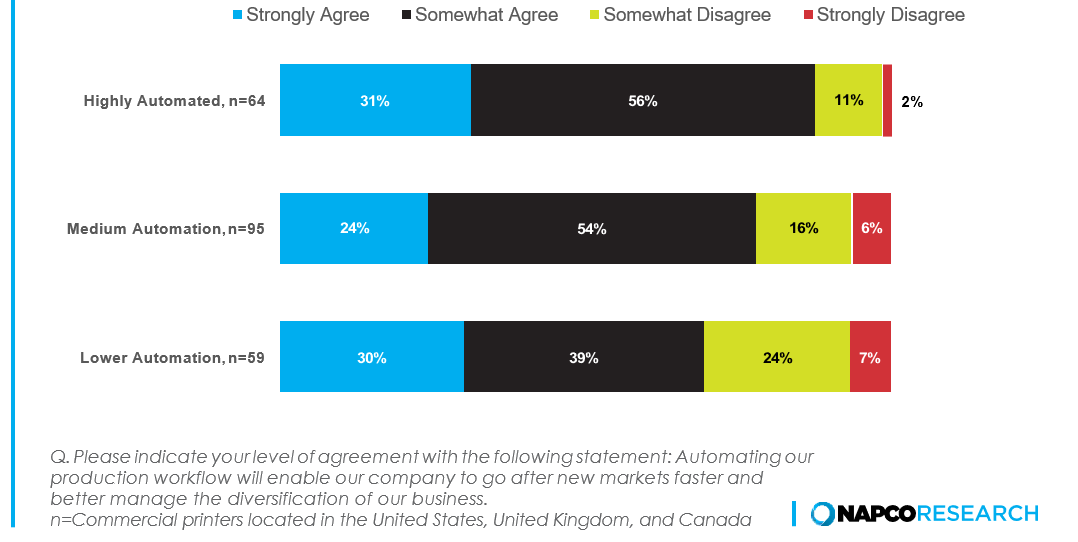 Workflow automation offers printer providers many benefits to improve and grow operations. While some printers have embraced automation more extensively than others, every printing business should recognize the benefits and the value that automation brings. A key takeaway from the research is that companies that have invested in automation are experiencing tangible benefits compared to those firms that are less automated.

There are many benefits for print providers to gain by automating the entire chain of production and business management, from ordering to shipping. Available now are end-to-end print production workflow automation solutions that are scalable, flexible, and, most importantly, able to deliver results that printers can measure and monetize. Workflow automation is a catalyst for improving efficiency, ensuring profitability, and future-proofing a print business.

Get in touch to get started

Thanks!
Your interest has been recieved and one of our sales staff will be in contact soon.

Oops!
Sorry, we were unable to process your request this time. Please try again.